A History of the Bank of New Zealand 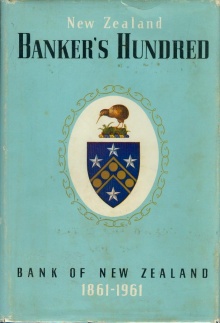 N. M. Chappel the Autor of NEW ZEALAND BANKER'S HUNDRED, has spent a Lifetime in the Service of the Bank of New Zealand. The son of a pioneer settler who arrived in New Zealand from England in 1860, he was Born at Wellington in 1892 and educated in Taranaki. He joined the Bank of New Zealand at Waitara in 1907. From 1917 to 1953 he was attached to head Office of the bank and primarily concerned with staff Administration.

Research into the history of the bank began as a Hobby in 1951 and became an all-absorbing occupation following retirement in 1954. In that year the work begann in earnest with a search of libraries, Museums and Banks records in London and Wellington. It continued until the centennial year of 1961.