The stories behind the most fascinating colonial, Confederate, federal, obsolete, and private American notes 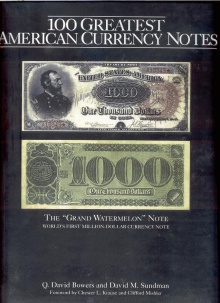 In this beautifully illustrated book, two of American's best-known numismatists take the reader on a personal guided tour of our nation's greatest currency notes.

Here you'll find the rarities, the unique and high-valued pieces that collectors dream abaout. You'll also find more common notes - ones so beautiful or with such strange and fascinating stories that everybody wants one. They're all inside: Lazy Deuce, the Tombstone Note, the Buffalo Bill, and more.

You'll travel back to colonial America, before the Revolution, and to the early days of the defiant young nation. You'll relive the drama and tension of World War II, through emergency notes made especially for Hawaii and other territories, and for military campaigns in North Africa and the Mediterranean. You'll see some familiar faces, such as Abraham Lincoln, George Washington, and even Santa Claus ... and some unique and colorful characters including Confederate president Jefferson Davis, the unlucky senator Charles Sumner, and the madman Emperor Norton I.

Battleships and locomotives, Army officers and Indians, politicians and polar bears - all of these and more await you among the 100 Greates Amerikcan Currency Notes.