How Forged Money Is the New Weapon of Mass Destruction 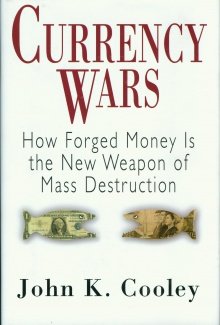 Mass counterfeiting is not just another sphere of organized crime. It is an age-old, aggressive form of economie warfare waged by states to destabilize eney governments - and since the late 1980s it has reached epidemie proportions.

In this groundbreaking book Cooley reveals that the extent of bogus money in circulation is unknown: that every year the authorities seize hundreds of millions of counterfeit US dollars worldwide: and at least 10 percent of Euro coins are reckoned fakes. Grandscale forgery, as he makes clear, has corrosive implications for global economic, political, and social stability.

In addition, Cooley demonstrates that the machinations of today's states echo the attempts in Antiquity by Persia, Greece, Rome, and China to use and defend against forgery and currency debasement. Counterfeiting remained a high crime throughout medieval and Renaissance Europe, later setting the likes of John Law and Benjamin Franklin on the case. It played a key role in the American and French Revolutions, the Napoleonic era, and the American Civil War and was used by the British, Germans, and Soviets in two world wars. Bad money mixed with postwar dictatorships: the KGB, CIA and Stasi; the IRA; Hezbollah; Medellin cartels; and the Chinese Triads.

Cooley maps this unwholesome matrix of war and politics, sabotage and subterfuge, with new evidence and documents only recently disclosed; he shows, finaly, how human greed and fear are eternal catalysts in world economics.