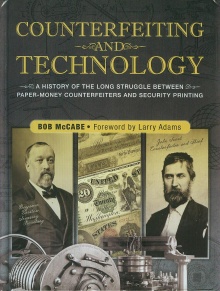 For centuries legitimate authorities and equally determined rogues have fought in an attempt to improve (or copy) the Technology and security of paper Money. Often counterfeiters, seeking to make perfect replicas, pushed Printers an governments toward greatly refined designs and security features.

Now, in Counterfeiting and Technology, their stories are captured in vivid Detail from colonial times to the present. Paper-Money historian Bob McCabe explores the lives of the Innovators who made brilliant advancements in the chemistry and ingenuity of America's paper Money. Counterfeiters, mostly unknown or unrecognized for their dishonest Cleverness until now, are finally brought to light. McCabe Details the beginning and Evolution of the U.S. Secret Service and the men who sought to capture the villains. And he follows the Technology of American currency - from paper-making to fugitive inks to roller presses - from early colonial attempts to the modern era.

Counterfeiting and Technology presents the history of paper Money in a way that's never been before. It combines chemistry and artistry, inventions and escapades, tales of arrest and daring escapes. Collectors and historians of American Money will love this engaging and informative narrative about our nation's paper currency.