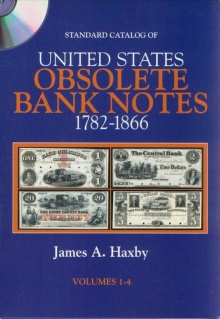 More than two decades later, Haxby's work remains the standard in obsolet bank notes. Naturally, market activity over 20-plus years has rendered many of the Prices noted in the original work outdated, but as a reference and identification guide, the Standard Catalog remains the Standard.

In recent years, it has come to our Attention that copies of the original four-volume book set have been hard to come by and in many cases quite expensive. In an attempt to bring Haxby's work on this emerging Hobby niche to a wider audience, we at KP have digitized all 2,700-plus pages and assembled them in a four-CD set.

If you owned Haxby's four-book set, we hobe These CDs help you enjoy the work in an entirely differnt way. If this is your introducion to the work, prepare yourself for hours and hours of enjoyment and ecucation.